We are a leading provider of ready-mix concrete and aggregates (sand and gravel, and limestone) in Blaine, Minnesota. We have been providing products and services for homes, commercial and public buildings, roads and bridges and more for more than 50 years. Our employees are experts in manufacturing concrete mixtures and in mining aggregates and have college degrees and advanced training in engineering, geology, safety, environmental management, and LEED certifications.

Concrete is perfect for driveways, patios, steps, fire pits, garage floors and more in Blaine. You can choose traditional grey concrete or jazz things up with the addition of color, texture and curves. Either way, choosing concrete for your home adds a touch of class you can take pride in! It is very difficult to tell the difference between decorative concrete and a mason laying stone or brick. Although they look similar, a mason laying stone or brick costs significantly more than concrete.

When you choose concrete for your driveway, patio, etc., you are making a wise investment! Did you know that concrete driveways last as long as 30 years and requires minimal maintenance? Blacktop (asphalt), on the other hand, requires more maintenance and major repairs or replacement can be required within 10 years of installation! 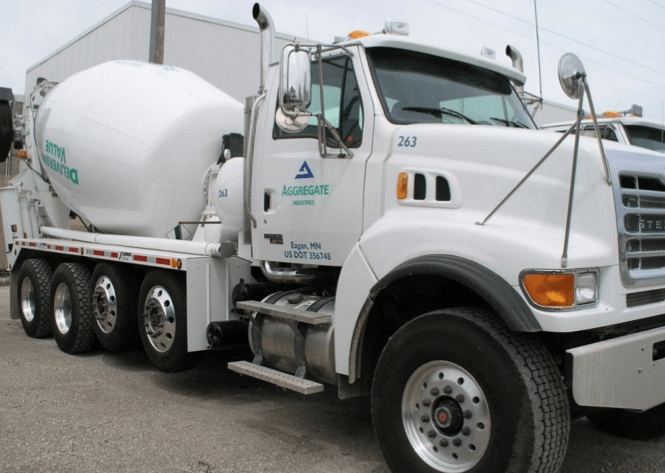 Our concrete products for contractors are consistent from plant to plant and our people are always willing to serve your needs. We offer our Emerald Series concrete in Blaine thats tough, durable and cost-effective. Most of all, it possesses excellent thermal-mass characteristics. Emerald Series can ensure that your project gains vital points needed for LEED certification by using concrete’s multitude of green properties – from low carbon to high percentages of recycled content.

Aggregate MN is proud to be serving the good people of Blaine, Minnesota and we’re happy that you’re interested in this remarkable city. We thought you might like to know a bit more about this fascinating and vibrant community.

The city of Blaine is located in Anoka County in Minnesota and is part of the Minneapolis-Saint Paul metropolitan area.  The 3 main routes in the city are Interstate Highway 35W, US Highway 10 and Minnesota State Highway 65.

Blaine was previously a part of the city of Anoka up until 1877.  The first settler in Blaine was Philip Lady who lived near a lake which is now named after him, Laddie Lake.  However, he died shortly upon arriving and his relatives moved to Minneapolis.

It was not until 1865 that Blaine saw its first permanent resident by the name of Green Chambers, a former slave who moved from Barren County, Kentucky after the Civil War.  In 1870, George Wall, Joseph Gagner and others settled and the town grew.

1877 was the year that Blaine separated itself from Anoka and established a township of its own. It was at that time that Moses Ripley the first elected chairman of the Board of Supervisors persuaded the other board members to rename the new township in honor of James Blaine, a Republican senator and Speaker of the US House of Representatives. By 1880, the population of the fledgling township grew to 128.

Blaine’s sandy soil and rich wetlands discouraged farming and made the area more a prime hunting area than anything else.  Blaine’s slow development ceased after World War 2 upon the introduction of starter developments in the southern part of the city which converted it to a more suburban area than rural.

The population grew from 1,694 in 1950 to 20,573 in 1970 to over 57,000 in 2010. For several years Blaine led the Twin Cities metro region in new home construction.  The development of the city is attributed to the creation of Interstate Highway 35, US Highway 10 and Minnesota Highway 64 which increased access to the Twin Cities making it a prime location for residential and business development.  Moreover, the opening of sand mines created thousands of acres of peat sod farms up for development.

Cost of Living in Blaine, Minnesota

Blaine is also where Globe University/Minnesota School of Business is located and is known as a nationally accredited college that offers masters, bachelor’s and associate degree programs in IT and business, health and legal sciences.

Blaine is also the home of Rasmussen College, a private school offering different courses to residents.

Here are some of the places of worship in Blaine MN

Businesses Based in Blaine

Based on the latest Comprehensive Annual Financial Report, here is the list of the top employers in the city:

The most popular industries in the city based on number of employees are in the fields of manufacturing, healthcare, retail trade and social assistance.

The Tavern Grill – offers great food and beautiful ambience, one of the most respected restaurants in the city.

Fun Things to Do in Blaine

Visit the Schwan Super Rink, which is located within the National Sports Center. The rink comprises an area of 148,000 square feet, has 32 locker rooms and a pro shop.  The arena also boasts of a climate-controlled café that overlooks four of the rinks.

Visit Lakeside Commons Park while in Blaine MN.  This is a park that also offers a public beach, volleyball court and playground for the kids. It also features an open play field as well as a shallow splash pad for young kids to play in.  You could rent a kayak or even a canoe at the boathouse.

The National Sports Center houses the Victory Link Golf Course, which is an 18-hole links-style course that covers about 400 acres of ground, and Tournament Greens.

Blaine Minnesota indeed is truly a great place to live.  If you’d like to talk to us about your concrete requirements in Blaine give us a call.  We can’t wait to meet you.